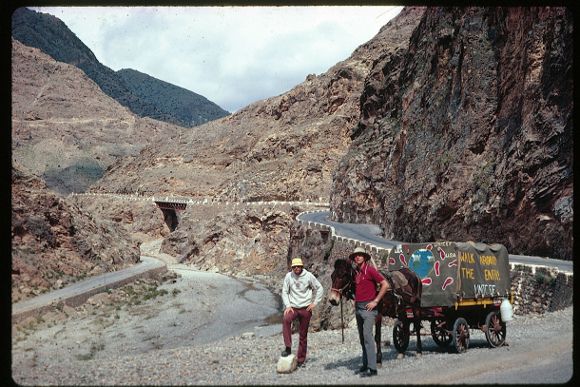 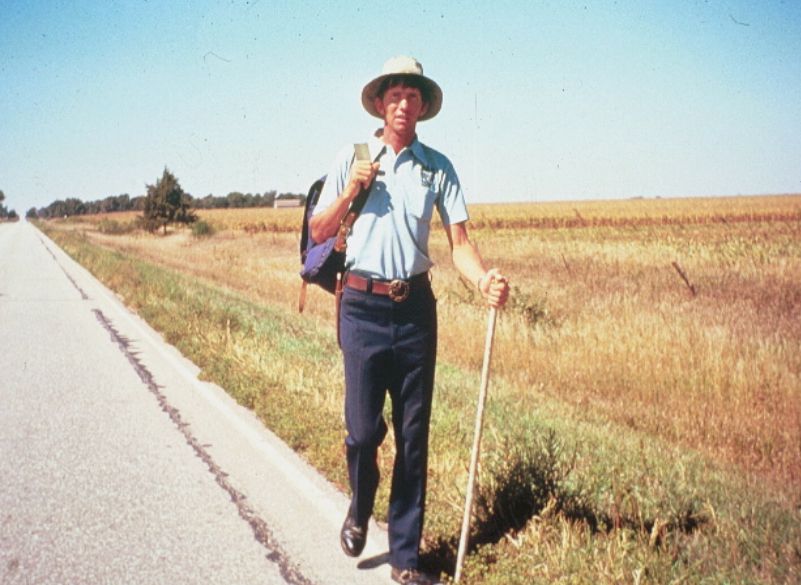 (da Wikipedia) Dave Kunst (born July 16, 1939 in Caledonia, Minnesota) is the first person independently verified to have walked around the earth.

The walk was intended to be achieved along with his brother John, but in the event John was shot and killed by bandits, and Dave wounded; Dave resumed and completed the walk with another brother, Peter. His walk was officially stated to be 14,452 miles.

Kunst's walk may not have been the first circumnavigation by foot, in particular Guinness World Records mentions George Matthew Schilling (walked: 1897-1904), and Dumitru Dancircumnavigated the globe between 1910-1923, in a Touring Club de France contest.

Kunst's trek began June 20, 1970, and ended October 5, 1974. Dave started his journey in Waseca, Minnesota with his brother John, a letter of recommendation from Sen. Hubert Humphrey, a scroll to be signed by officials along the way, $1000 and a mule named Willie Makeit carrying camping supplies.

The brothers walked to New York City with Willie Makeit, then flew to Portugal, where they acquired a second mule (Willie stayed home). Dave and John walked across Europe and visited Monaco, where they met Princess Grace, and Italy, where they encountered Thor Heyerdahl.

During their travels, the brothers asked people to send donations to UNICEF, which a reporter in Afghanistan mistakenly wrote that they collected and carried along with them.

John was killed when bandits shot him in the mountains of Afghanistan in October 1972. Dave was shot in the chest during the same attack, but survived by playing dead. After spending 4 months recovering from his injuries, Dave resumed his journey along with his brother Pete, from the spot where John was killed. As they continued their travels, Dave and Pete were denied access to the USSR, so they flew from India to Australia.

Pete returned home during the Australia-leg of the trek, where Dave continued on alone, by this time on his 3rd mule. Unfortunately, the mule died and Dave was left hauling his wagon of supplies himself. He was on the verge of abandoning his supplies, when he fortuitously met Jenni Samuel, a schoolteacher from Perth. She helped pull his wagon with her car, while he walked alongside. Dave returned to Australia for a year after completing his journey. Jenni and Dave later married and are still together as of 2013.

"I walked 20 million steps" Dave says, figuring 31 steps per 100 feet "I wore out 21 pairs of shoes but I proved something to myself: If a human being makes up his mind, is determined, sets goals, he can walk around the world".

The brothers were commemorated in June 2004 with a sign in their hometown of Caledonia, Minnesota. The inscription reads: "Caledonia: Birthplace of the Earthwalkers David, Peter and John Kunst."