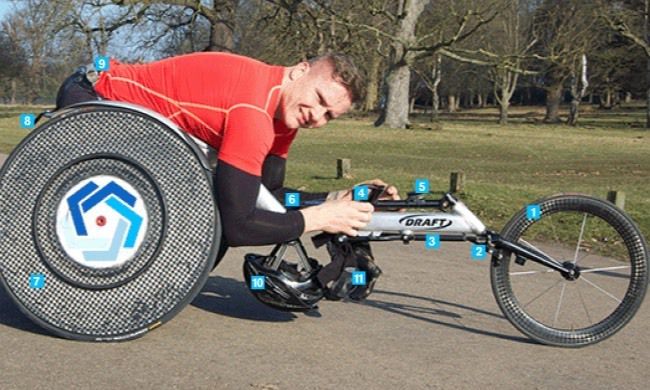 Six-time London Marathon champion David Weir took time out from training in Richmond Park recently to give us a guided tour of his race chair.

When Great Britain’s David Weir lines up for the start of the Virgin Money London Marathon on Sunday 26 April he’ll be looking to win a record-breaking seventh London Marathon title. Weir will return to the capital looking to better his 2014 runner-up spot but, with so many great athletes on the racing scene right now, he’s not taking anything for granted.

We caught up with the ‘Weirwolf’ in London’s Richmond Park to find out how his training’s going ahead of this year’s race. He also took time out to talk us through the ins and outs of his race chair.

How’s your training for London going? It’s going really well. I’m really looking forward to it. I’ve had a very strong winter this year. I know it’s been cold but it’s been very dry, so I’ve been able to get out most days. If you can get out and do the miles, that’s what you need to cover all the marathons and half-marathons I’m doing. London is important for me, I’ve come second last year and fifth the year before and I don’t like coming second so I’ve put that little bit more effort in this winter. I’ve also got the challenge of the Boston Marathon the week before.

What are your big targets for 2015? There are quite a lot, but Boston and London are the big challenges for me because I’ve never done that sort of mileage together at that time of year. I need those sorts of challenges to get me motivated and focused. Even after two marathons in a week it puts you in good stead for the track season and a few marathons later on in the season. I’ve got a busy year as I like to get all my Olympic qualifying standards in the year before the Games, which means that next year I can pick and choose what races I do.

It was a tight finish with Marcel Hug at last year’s London Marathon. Are you expecting another close finish this year? There are a lot of us racing now! Kota Hokinoue’s pushing really well – he won the Oz Day 10K in Australia earlier this year. He looks very strong and fast. But there could be at least six of us who can win on the day so it’s going to be an interesting battle. Last year I got beaten quite heavily by Kota in Lisbon, and I only had a month to catch up before London. I don’t want to do that this year; I want to be ready in every race. Un giro guidato della wheelchair di David Weir e dei suoi accessori.
Front Wheel. The front wheel measures 20 inches in diameter, and the half-carbon, half-spoke design is to make it more aerodynamic. If you had a full carbon wheel like the back wheels you get blown all over the place – and you don’t want that!
Forks and Damper. The forks go onto the front wheel, with a little arm that comes joined to a damper bar. The damper bar is mostly used for the track, but it’s spring loaded, to turn, and it keeps the front wheel stiff and straight. On the road you don’t want it flapping about because you lose speed. The turning circle is not the greatest so you have to judge tight corners or mini roundabouts, and make sure you know how wide you can go when cornering.
Compensator. The damper bar is connected to the compensator, which is mostly used for the track. It’s used for going round the bends, so you hit that on every straight and every bend.
Handlebars. These are connected right through the tube of the frame and go down to the forks to steer the front wheel. They have a brake that doesn’t do much. It slows you down but it’s there because you have to have it there.
Speedo Device. This tells me how fast I’m going and my average speed. During a race I usually leave it on average speed, that’s how I work. I know how fast I’m going with average speed – if it’s high I know I’m pushing well, if it’s low I know I’m not.
Garmin Device. I mostly use this for my heart rate but it’s got everything on it – it records average speed, the gradient of the hills and stuff like that. My sports scientist and coach Jenny Archer use this info to discuss whether my heart rate is too high or low, or if I’m not doing enough. They can go through it because it saves the data so they can log on and check it for me. It’s a good tool I’ve been using for a number of years.
Back Wheels. The back wheels are carbon fibre. They’re very light but very strong and roll very well. I use Continental rubber tyres on the roads because they’re good at resisting punctures. You want something that’s durable and rolls well so you can have a good balance. The wheels are fixed onto the back axel.
Seat. The seat is also made of carbon fibre. My knee plate is aluminium although it’s combined with the frame of the chair. There’s no padding – no nothing – so it’s not very comfortable!
Back Strap. This keeps me down and holds my bum in really! I sit quite high for a racer but everyone has their own preference of sitting and pushing.
Helmet. This is a training helmet, a Kask – Team Sky uses them too. I’m getting a new racing helmet as I auctioned the last one for my charity, www.weir-archer-academy.com. So I’m going to get a new Kask time-trialling helmet. They’re pretty good – very light and comfortable.
Gloves. This is the most important bit of kit – mine are soft harness gloves, but everyone uses different types. The grip is not too bad but I have to use different material if it’s raining.

Six-time London Marathon champion David Weir took time out from training in Richmond Park recently to give us a guided tour of his race chair. When Great Britain's David Weir lines up for the start

David Weir e la sua presenza, nel corso degli anni, alla Maratona di Londra. Weir finished fifth in the 2000 London marathon setting a time of 1:47:11.
In the 2001 London marathon, he finished third in a time of 1:50:05.
His breakthrough in the competition came in 2002 when, as the youngest competitor in his category, he won in a time of 1:39:44. Before the race Weir's personal best fell outside the top twelve competitors at that year's Marathon, and he was not considered a serious challenger. But at the age of 21, he beat his personal best by seven seconds to win the race. Weir's training partner Tushar Patel, both members of Kingsmeadow-based Velocity Wheelchair Racing Club, finished a minute and half behind in second place.

After the race, Weir said: "It was a childhood dream to win the London Marathon and I'm extremely happy with how the race went. I was sure people were going to catch up with me when I made a break away but they didn't. It was brilliant to cross the line first and with a personal best time".
Weir was second in the 2003 and 2004 London marathons. His 2003 time of 1:34:48 was 5 minutes faster than his personal best.
In 2004, wet conditions and problems with spray from his wheels yielded a slower time of 1:42:50.
In 2005 Weir finished third, with a time of 1:36:03,[18] in a race that saw the first seven competitors cross the line separated by 13 seconds.
In 2006 Weir won his second London marathon, setting a course record in wet conditions with a time of 1:29:48.

With this time, Weir also became the first wheelchair racer to break the 1:30 mark.

Weir said after his win, "I wasn't even going to take part this morning. I've been suffering from a cold and it was 50/50 whether I would turn up or not".
In 2007 Weir won his third London marathon. He beat Australian Paralympic champion Kurt Fearnley by 1 second in a time of 1:30:49, the second fastest time seen on the London course. Fearnley, undefeated since October 2006 in eight marathons, paid tribute to his fellow competitor.
On 13 April 2008, Weir won his third London Marathon in a row, and his fourth in total. In a time of 1:33:56, he finished 4 seconds ahead of Australian Kurt Fearnley with a sprint finish on the Mall. Weir's fourth win gave him £7,600 in prize money.
In 2009 Weir finished in second place, in a time of 1:28:57, behind Kurt Fearnley. In another sprint finish on the Mall, Fearnley edged out Weir to set a new course record of 1:28:56.
Despite getting punctures to his front and left wheels Weir still managed to finish in third place in the 2010 London marathon in a time of 1:37:01. At one point, he led the race by 4 minutes.
In 2011 Weir won his fifth London marathon in a time of 1:30:05. This was the tenth year in a row that Weir had finished with a podium spot.
In the run-up to the 2012 London marathon, Weir revealed "What I’d say to the guys coming to London is that my training is going great and I don’t think I’ve ever felt in such good shape at this point in the year. I’m averaging about 80 miles a week in the chair." In 2012 Weir won his sixth London marathon in a time of 1:32:26. He remarked after the race "Grey-Thompson inspired me in this sport. I saw her compete in Sydney as a youngster and I went on to medal in 2008." Weir hinted that the 2012 London competition might be his last. With Weir's sixth win in the London Marathon he equaled the record of Baroness Tanni-Grey Thompson. He said afterwards: "This is my favourite win ever because the field was so strong. I was quite emotional when I crossed the line as it could be my last London Marathon for a while".
Weir competed in the 2013 London Marathon, finishing in 5th place in 1:31:31, 2 seconds behind race winner Kurt Fearnley. In the 2014 London marathon he came a close second
Weir hasn't always seen eye to eye with the organisers of the London marathon. In 2006, he criticised them for treating wheelchair athletes as second class citizens. He told the Sutton Guardian, "If I can help put disabled athletics on the map along the way, that is what I want to do". David Russell Weir, CBE (born 5 June 1979) is a British Paralympic wheelchair athlete. He has won a total of six gold medals at the 2008 and 2012 Paralympic Games, and has won the London Marathon on