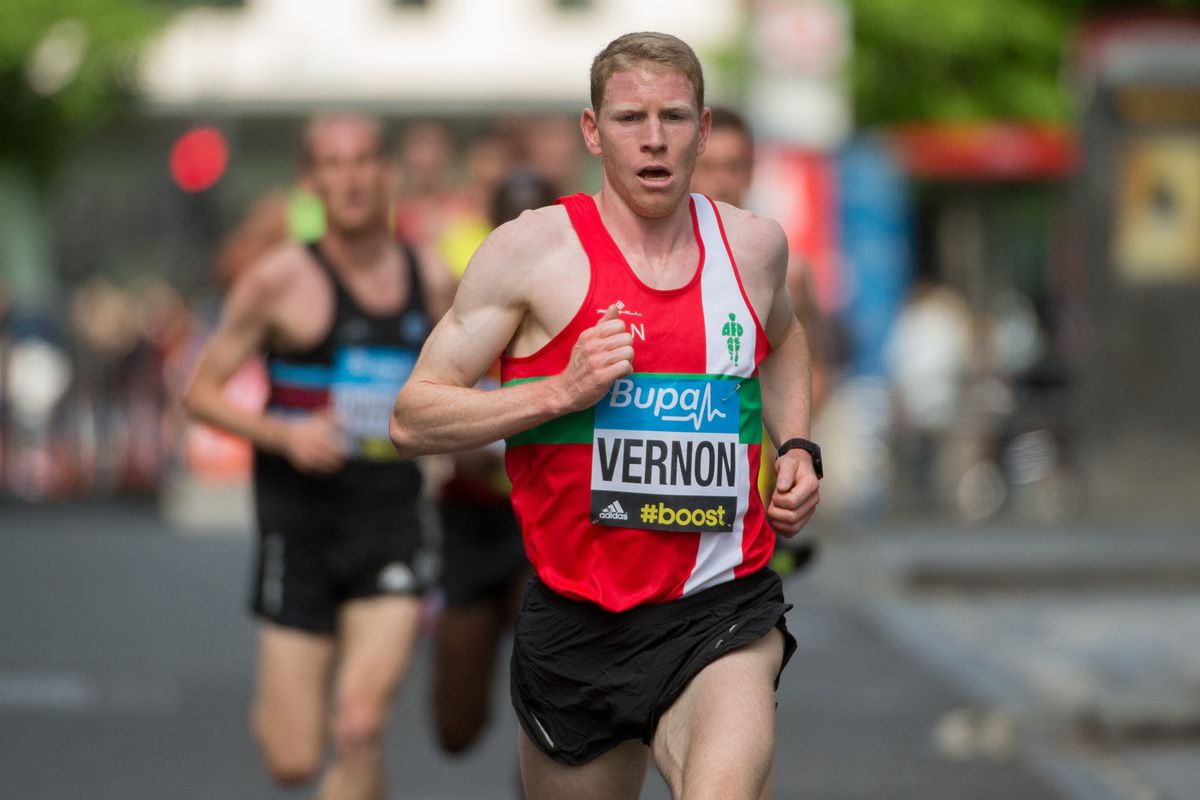 Andy Vernon smashed his personal best to retain the Bupa London 10,000 title in central London this morning, while Jo Pavey overcame a bout of violent sickness to regain the women’s crown after almost withdrawing from the race overnight.

The European Championship medallists from Zurich last summer became 2015 British Athletics 10K champions after pulling away from their nearest challengers over the final third of the looping course from The Mall to the City and back to St James’s Park.

Leading from the start, Vernon never looked troubled as he shrugged off the attentions of Liverpool’s Jonny Mellor soon after 6K and sped through the closing stages to cross the Finish Line in front of Buckingham Palace in 28:38, some 43 seconds inside his best and the quickest road time by a Briton for four years.

Behind him, the tiring Mellor held off the fast-finishing Luke Caldwell to claim second in 29:13, just one second ahead of the Dorking and Mole Valley Harrier.

“I felt in control the whole way,” - said Vernon, the Aldershot, Farnham & District athlete - after clocking the quickest winning time at this event since Mo Farah set the British record of 27:44 in 2010. It was great to win last year, but this year was just as good. The support out there was brilliant and it was fantastic to have all the mass runners cheering me on”.

Pavey also gave thanks for the “fantastic support” which carried her to the line in 32:56 just hours after she’d endured a sleepless night of vomiting and fever.

Pavey made the decision to run only after warming up, when she realised her legs felt “kind of OK” despite the night’s exertions. After starting with understandable caution, she moved in front of early leaders Beth Potter and Rebecca Murray with just over 3K to go and from that moment on never looked back.

The European champion strode away to win by 23 seconds from Murray with Faye Fullerton eight seconds back in third.

“I really didn’t know what to do after last night" -said the 41-year-old Exeter Harrier after regaining the title she last won in 2011 - "I threw up all night and I was freezing. I just couldn’t keep anything down. I was violently sick five times, and even had red spots under my eyes from the effort. It was a real gamble to run but I’m so glad I did. To win after a night like that is surreal. It was so hard to judge what to do, but my legs didn’t feel that bad in warm up, and then after a few kilometres I really got into it”.

Vernon was into it from the start. A year ago he was a late replacement for Mo Farah, a five-times champion at this event. But after winning European 10,000m silver on the track last summer, the 29-year-old was billed as the man to beat this time.

With the Olympic qualifying time already in his bag this season, Vernon set off with confidence and intent at the head of a large group of some 20 runners.

They passed the 1K-point on the Strand in a swift 2:48, Vernon prominent alongside Caldwell, Mellor, Scott Overall, Ryan McLeod and Jonny Hay.

They slowed through the second kilometre, passing 2K in 5:47, before Vernon took five or six clear of the rest along Chancery Lane. The champion put his foot down along Holborn Viaduct, passing 3K in8:50 and opening a few metres of daylight on Overall, Caldwell and Mellor.

The 4K-point slipped by after 11:33, with Vernon now up on his PB schedule. He turned into Threadneedle Street in the heart of the City with a few metres advantage, but Mellor moved onto his shoulder as they hit the halfway mark in 14:25.

Overall now dropped back to third and it became a two-man race between Vernon and Mellor, both looking supremely relaxed as they passed St Paul’s Cathedral for the second time.

Now heading west, Vernon pushed on along Newgate Street, and at first Mellor proved his equal with every stride. They hit 6K in 17:21 before Vernon’s strength finally began to tell. He opened a few metres on Mellor as he dipped back towards the Strand for the long run home, while behind him Overall was swallowed up by the chasing pack.

His nose now in front, Vernon grew in strength and Mellor could not live with his pace. He passed 7K in 20:14 with a 30m advantage, Mellor now fading rapidly from the scene.

The closing stages were all about the champion. In 2014 he’d won by just 15 seconds over Chris Thompson. This time he could enjoy the cheers of the masses as he strode along the Strand towards Trafalgar Square, Whitehall, Birdcage Walk and the Finish Line on Spur Road.

“Jonny stayed with me for a couple of kilometres but I knew I had a lot more in the tank so I was never worried about it,” - said Vernon who ran the second 5K in 14:08. - “What I love about this event is that when you're running back to the finish you get all the other runners cheering you on. I don’t know about beating Mo’s five in a row, but I would love to keep coming back and running it again and again. Now I can go on to the summer with confidence, hopefully to the World Championships in Beijing, and then the Olympics.”

Pavey also has the Olympics in her sights, although she has decided to skip Beijing this summer. After struggling to find her form at the Great Manchester Run last weekend, she was delighted to pull through this tough test of her fitness and determination.

“Rebecca and Beth both put in surges early on but I just didn’t want to go too hard because I thought I might run out of energy after last night,” - said Pavey, who passed halfway in a steady 16:31 before producing a negative split in the second half. - “I only had a bowl of porridge this morning so I wasn’t sure how I would last, or even if I would finish. But with 3K to go I decided to take it on. It was all a bit like stepping into the unknown, but thankfully I got through OK. I’m really frustrated I couldn’t run quicker because after Manchester I wanted to show that I’d started to move forwards. I didn’t want to drop out and have to make loads of excuses. I’d put a lot of effort into getting ready for this and in the end I enjoyed it out there. I just love this race, it’s so exciting running round the streets of London.”

Behind the elites, around 12,000 runners completed the scenic course, which takes in many of the capital’s best known sights, including Trafalgar Square, St Paul’s Cathedral, Whitehall and Parliament Square.

The Bupa London 10,000 incorporates the British Athletics 10km Championships for men and women.
The runners started on The Mall in St James's Park, ran east down the Strand before heading into the City of London over Holborn Viaduct. They returned down Whitehall and Birdcage Walk to finish on Spur Road outside Buckingham Palace.

The event forms the second part of a packed weekend of road running around central London which will started on Sunday morning (24 May) with the third edition of the Bupa Westminster Mile, a series of races around St James’s Park for runners of all ages and abilities, from elites to families with young children.

We have 29 million customers in 190 countries. With no shareholders, we invest our profits around the world to provide more and better healthcare and fulfil our purpose.

We employ 79,000 people, principally in the UK, Australia, Spain, Poland, New Zealand and Chile, as well as Saudi Arabia, Hong Kong, India, Thailand, and the USA.