After Oscar Perez' victorious arrival in the Abbé Henry Square in Courmayeur, numerous spectators enthusiastically applauded the runners-up as they crossed the finish line

New emotions for each arrival. Just three hours after Perez, Grégoire Millet from France was the next to finish, with a time of 78 hours 50 min, putting him in second place.

What a moving moment! All his family (wife, children and relatives) were there to share with him this long-awaited end to an adventure.

A remarkable time, too, an hour less than last year's winner. "Scientific studies have shown that it's best to start really fast and  slow down later on, which is the strategy I used, risking  paying  the consequences. It was a tactic established from the beginning and the race quickly became a contest among the three of us. Oscar was the fastest  straightaway! Christophe goes well downhill and I go uphill a lot better, each of us makes the most  of the other but always with a positive spirit! It's the hardest and the most beautiful race in the world. I have as much respect for the finishers as I have for those  who pull out because it's really hard. In the world of  trails, this is the race that  speaks for itself!"
Prima tra l e donne l'italiana Francesca Canepa. Showing signs of fatigue, Christophe Le Saux crossed the finish line after 80 hours and 14 minutes. "Oscar was the strongest, he ran a great race. It's always a pleasure to compete in Aosta Valley where the local people cheer us on all along the route. It's really a fantastic environment! I came second last year, third this year so I'd better come back next year to take first place!"

On Wednesday evening another two trailers crossed the finish line in an ecstatic mood. Spain's Pablo Criado Toca, after 83 hours 37 minutes, expressed his joy; "Rankings don't matter to me. It's a contest against oneself, victory is in your soul, the aim is to arrive at the finish as well as possible!"

Franco Colle, an Italian from Aosta Valley, (winner of the Valdigne Gran Trail 2012 - 57 km) arrived fifth and received a hero's welcome sprayed with champagne! "I've thought they were all mad since the first edition! It's just the most unbelievable race with the people of Aosta Valley ready to help all of us along the route. It's awesome to see an entire region take part like that! Moreover, all my friends were often there on the passes and at night!" 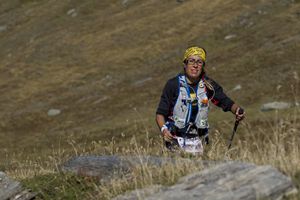 The first woman to arrive at 1.13 pm was Francesca Canepa despite two suspensions of the race; the first at Barmasse because of a landslide at 1.20am on Wednesday and the second at the Frassati refuge at 3.30am on Thursday due to snow and wind. The welcome that she received matched her fine performance! Taking the lead at Valgrisenche (48km), she gradually managed to widen the gap.

"I'm so happy because it's a beautiful and very, very difficult experience. My worst  moment was at the beginning of the race at La Thuile (17 km) when I didn't feel at all well. After that, it went better. I hadn't planned my rest times so actually the compulsory stops made me rest, which was an advantage".

There's a fierce contest for second place between another two Italians, Sonia Glarey and Patrizia Pensa.
Will the women's podium be an all-Italian one?

In spite of recent weather conditions, there are still more than 410 trailers competing. For them there are only 3 days and 2 nights left.

The Tor is not yet over, though! The last runner will cross the finish line at 9.00 pm on Saturday.

The time barrier has been extended by 5 hours after the race was stopped on Thursday morning between 3.30am and 9.00am